A Hero in Heaven

“A Hero in Heaven” is a 45-minute documentary that chronicles the life of Michael Levin (z”l), the only American-Israeli soldier killed during the Israeli/Hezbollah war in 2006.

Born and raised in the United States near Philadelphia, Pennsylvania, Michael Levin (z”l) grew up in a traditional, loving Jewish home. At the young age of sixteen, Michael had decided that he wanted to move to Israel and join a front-line combat unit in the Israeli Defense Forces. 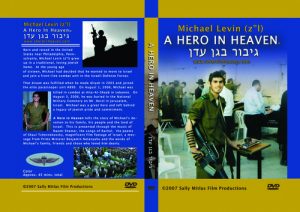 That dream was fulfilled when he made Aliyah in 2003 and joined the elite paratrooper unit #890. On August 1, 2006, Michael was killed in combat at Aita-Al-Shaab in Lebanon. On August 3, 2006, he was buried in the National Military Cemetery on Mt. Herzl in Jerusalem, Israel. Michael was a great hero and left behind a legacy of Jewish pride and commitment.

“A Hero in Heaven” tells the story of Michael’s devotion to his family, his people and the land of Israel. This is presented through the music of Naomi Shemer, the songs of Rachel, the poems of Shaul Tchernokovsky, magnificent film footage of Israel, a message from Prime Minister Benjamin Netanyahu and the words of Michael’s family, friends and those who loved him dearly.

“A Hero in Heaven” was written, produced and directed by Sally Mitlas of Mitlas Productions, LLC.

It has gained national and worldwide acclaim since its release in December 2007.

Responses to the Film

“The Levin family has allowed a Philadelphia woman who was drawn to Michael’s story to make a documentary about his life and legacy. The film, ‘A Hero in Heaven’, was shown in Israel on Channel 10 on Remembrance Day. After the broadcast, thousands of phone calls and e-mails flooded Channel 10 and the Levin family, saying, according to Mark Levin: “Your son is teaching [Israel] about Zionism…”

“This film is both heartbreaking and inspiring, a portrait of a young man, the product of a close family, who fell in love with Israel as a teenager and dedicated his life to making Aliyah and serving in the Israeli army… “…The most lasting image in this film is of Michael’s perpetual smile, his sense of doing exactly what he wanted, despite the added stress of his being a ‘chayal boded’, or lone soldier, having no relatives in Israel.”

“The story of Michael Levin’s life and death has become a kind of touchstone for Zionist devotion and Jewish identity in an age of disillusionment. The essence of his story as a suburban Philadelphia boy makes Aliyah to Israel, joins the army, and dies fighting in Lebanon is for many the story of Israel’s fight for survival. A new documentary about him, ‘A Hero in Heaven’, has been broadcast on Israeli television on Yom Hazikaron, Memorial Day, and is having its own impact as it is shown to groups around the country and the world.”

“A poignant tribute to Michael Levin… The title of the film was inspired by a letter Michael’s twin sister, Dara, received shortly after his death. “Your family has suffered a horrendous loss,” it read, “but God has gained ‘a hero in heaven’.”

“Using footage of Michael Levin from his military training and other pivotal moments of his life, as well as photographs and heartfelt interviews with his family, fellow soldiers and friends, Sally Mitlas’ film, ‘A Hero in Heaven’, celebrates a brief but fulfilled life … The story of an American boy who chose to fight for Israel.

“A Hero in Heaven” emerged after nearly 30 hours spent collecting film footage in Israel, and the documentary features interviews in English and Hebrew from Levin’s friends and fellow IDF members in Israel. Shifting between Hebrew and English, Mitlas paints a moving picture of a young American dedicated to the state of Israel, who lived by the belief ‘You can’t fulfill your dreams unless you dare to risk it all.’ Music from Naomi Shemer, a songwriter and composer known as the ‘First Lady of Israeli Song,’ poems by Shaul Tchernokovsky and a writer known as ‘Rachel’ unite the script and serve as transitions between the interviews in Israel and memories from Levin’s family in the United States of America.”